Strains passing the TIER III screen are subjected to outdoor pond culture testing at the PNNL Algae Testbed (PAT) in Arizona. The objectives of this TIER IV strain screening are to

During the TIER IV strain testing, six 100 L raceways are operated simultaneously, allowing for the evaluation of three strains in duplicate ponds (Figure 1).  Each pond is equipped with a motor-driven paddlewheel, and a submerged temperature and pH probe.  The culture pH is maintained at a set-point of approximately 7 via feedback-controlled CO2 sparging, and a quantum sensor records the daily photon flux density. All data except the light intensity is recorded continuously using a Neptune Systems Apex system, while the light intensity is recorded using a LI-COR 1400 datalogger. 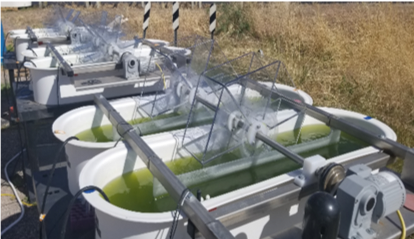 All pond cultures are grown at 20 cm depth in nitrogen-replete DISCOVR medium.  Culture growth is monitored daily using optical density (at 750 nm, OD750) and ash-free dry weight (AFDW). Ammonia nitrogen concentration is measured using a Hach HQ440d ion selective electrode. In order to maintain nutrient replete conditions, additional nitrogen is added if the concentration falls below 10 mg-N/L. The linear-growth phase nutrient-replete cultures are harvested with a continuous centrifuge when achieving an ash-free dry weight of ca. 500 mg/L.  The pond cultures are then restarted to generate nitrogen deplete biomass by using a small portion of the centrifuged algae paste as inoculum. The nitrogen deplete culture is started with fresh DISCOVR medium, and no additional nutrients are added during the experiment, allowing the culture to enter nutrient-deplete conditions.  Nutrient-deplete conditions, defined as culture ammonium nitrogen concentration below 1 mg/L, are maintained for about 9 days before the nutrient-deplete biomass is harvested with a continuous centrifuge.  Both the nutrient-replete and nutrient-deplete biomass are freeze-dried and shipped to NREL for compositional analyses.

During May and June 2018, three DISCOVR summer season strains (Scenedesmus obliquus DOE0152.z, Scenedesmus obliquus UTEX393, and Chlorella sorokiniana DOE1116) were grown in duplicate ponds at the PAT. Biomass concentration increased linearly with time during the two subsequent nutrient-replete growth phases (Figure 2).  Following nitrogen-depletion, the rate of biomass growth slowed down after day 17 (Figure 2).  The areal biomass productivity was calculated as the average of the four linear phase productivities during nutrient-replete culture conditions (Figure 3), indicating that the highest biomass productivity was achieved by DOE1116 (17.1 g/m2-day). UTEX393 had the second highest productivity (16.7 g/m2-day), followed by DOE0152.z (16.1 g/m2-day).

While the biomass productivity among the three strains differs by less than 1 g/m2-day, the three strains exhibited very different culture stabilities. The UTEX393 ponds stayed relatively clean and despite some contamination with diatoms, maintained high productivities until late into the N-deplete period. By comparison, DOE0152.z was outcompeted by UTEX393 presumably via contamination from a previous experiment with this strain at the PAT, was then replaced by another invading, flagellated microalga during the N-deplete period, demonstrating the least stability among the three strains. Both DOE1116 ponds were contaminated by ciliates, but this contamination did not appear to negatively impact the productivity of the pond. In summary, UTEX393 and DOE1116 appear to be the most productive and stable summer season strains tested in this 2018 experiment.

The most productive strains emerging from TIER IV testing at the PAT will be evaluated in seasonal SOT campaigns conducted at AzCATI.

Ash-free dry weight (AFDW) concentrations as a function of time for the six outdoor ponds during the 2018 DISCOVR summer strain testing experiment. 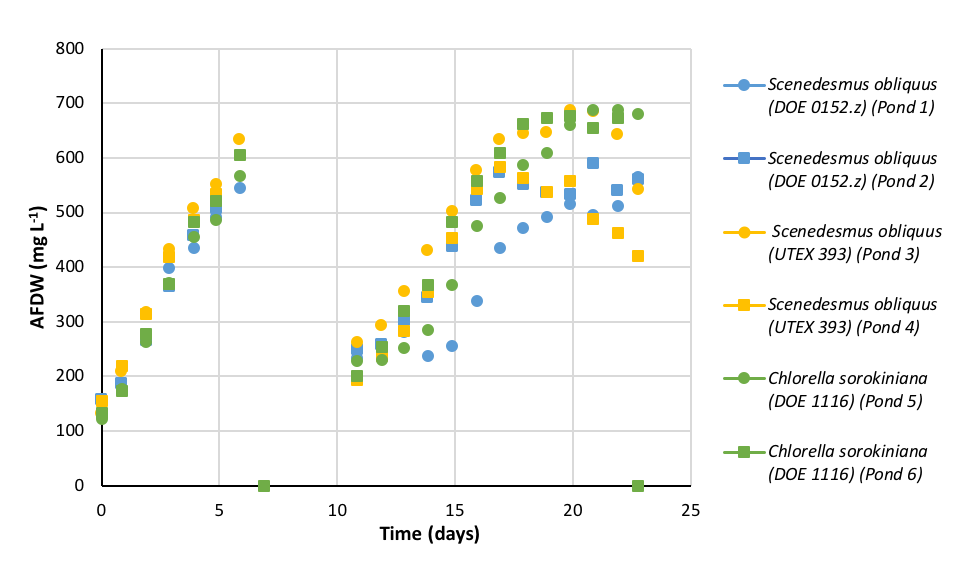 Average biomass productivities of the three strains during N-replete period of the 2018 DISCOVR outdoor pond culture experiment, calculated by multiplying culture depth by the slope AFDW versus time curve. Error bars are one standard deviation (n=2). 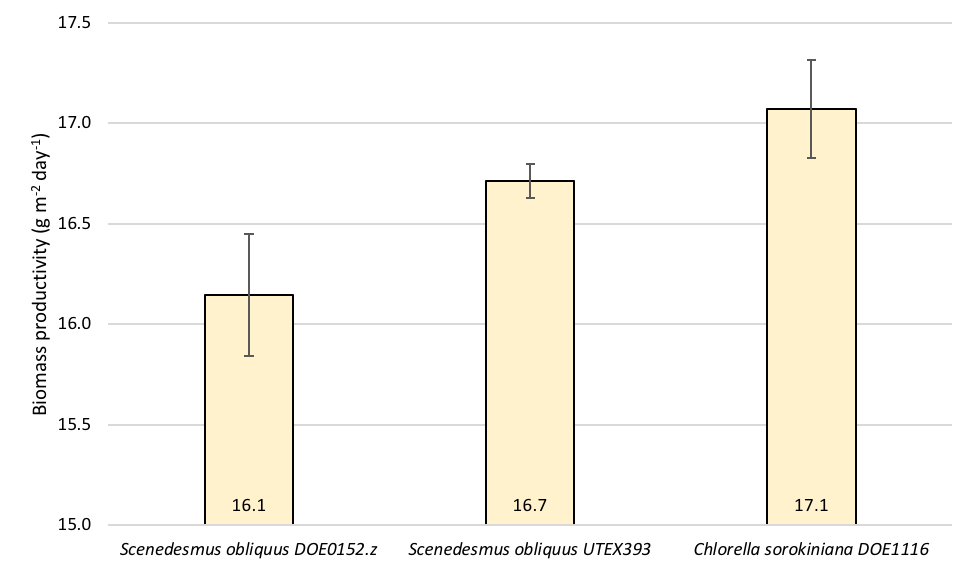