As shown in the DISCOVR workflow figure, the screening and testing of new strains is carried out in six consecutive phases or tiers. In TIER I, batches of strains obtained from culture collections or industrial partners are screened in specifically designed PNNL thermal and salinity gradient incubators with respect to their maximum specific growth rate as a function of temperature and salinity. A subset of strains with suitable temperature and salinity tolerance is then subjected to three TIER II tests that are concurrently carried out at PNNL, NREL, and SNL. The seasonal biomass productivity of the down-selected strains is quantified in PNNL’s recently developed and validated Laboratory Environmental Algae Pond Simulator (LEAPS) photobioreactors.  Biomass harvested from the LEAPS is analyzed for basic composition (lipids, protein, carbohydrates) by NREL.  The resistance of strains to algal/bacterial communities and predation is assessed in laboratory scale stress tests by SNL. In TIER III, the further down-selected strains are concurrently improved by cell-sorting and adaptive evolution at LANL, and evaluated in terms of culture stability in the SNL indoor testbeds. Only strains with the highest biomass productivity and resistance to deleterious pond culture biocontaminants move forward to TIER IV testing in PNNL’s Algae Testbed (PAT) in Arizona, where harvested biomass is subjected to detailed biomass compositional and co-product analyses at NREL. Those strains that demonstrate both stable and high biomass productivity at the PAT move to TIER V testing at the State of Technology (SOT) testbed site at AzCATI (Mesa, Arizona). Finally, strains completing successful testing at AzCATI and contributing seasonal SOT productivity data inputs for the NREL’s Algae Farm Model, will be further characterized at TIER VI so that the species-specific Biomass Assessment Tool (BAT) can be run, generating seasonal and annual biomass productivity maps for use in lifecycle and techno-economic analyses. 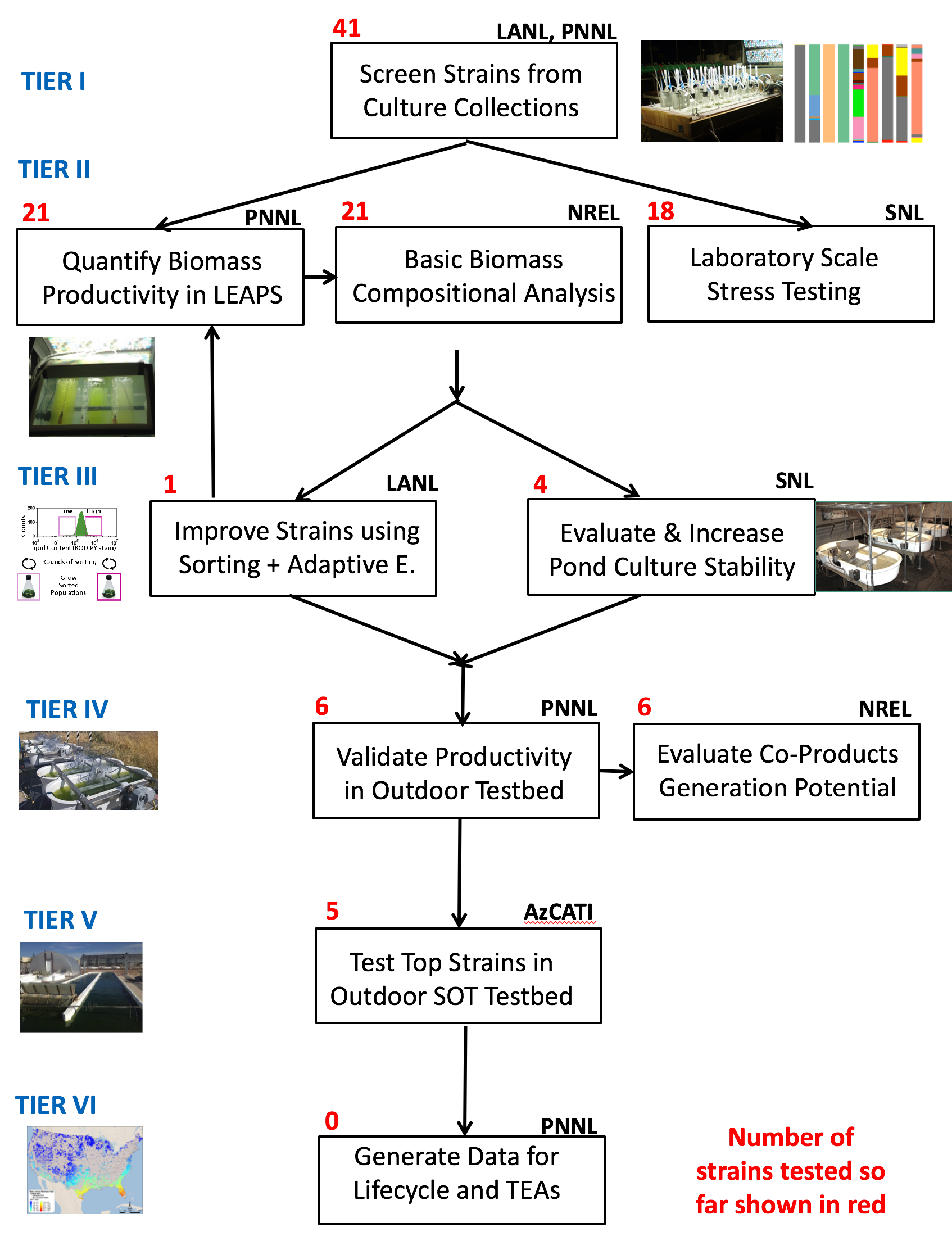